In this post we will show you how to get from Malaga to Torremolinos. Because Torremolinos is one of the most important cities for Malaga tourism. It was also the first city dedicated to tourism. In which all the stars of the golden age of Hollywood spent their vacations.

Also if you want to know more about Malaga, visit our blog every day. Because every day we bring you more information and more posts.

Typical Easter food in Malaga that you can taste!

The cod fritters cook with crumbled cod, parsley, flour to batter and a frying pan with oil to fry them.

It can be eaten all year round, but as it is an austere meal it becomes a typical Easter meal.

Legend has it that this dish was born in Seville in the 13th century.

This speciality is typical of the province of Malaga. The most important thing is that the lemon belongs to a sweet variety that can be eaten. Because it is less acidic. It is eaten during the Holy Week processions in Malaga. In particular, on Good Friday morning.

The torrija is the most typical sweet of Easter. All you need is hard bread dipped in milk (or wine) with sugar, cinnamon, lemon peel and egg yolks. And then fried in sunflower oil.

Rice pudding is a simple dish for dessert. All you need is cinnamon, sugar and rice pudding.

Ajoblanco is a cold soup very typical of Malaga. It is eaten all year round but in Easter it can be accompanied with cod. That is why it is called ‘ajoblanco bacalao’.

Its recipe is very simple with bread, ground almonds, water, oil, salt and garlic. In other occasions the ajoblanco can be accompanied with grapes or melon.

The pestiños are another of the typical sweets of the Andalusian Holy Week. It is of Islamic origin, since in the Maghreb there are similar recipes. And it shares ancestry with another Islamic sweet, the shebbakiyya. It is made with flour dough, yeast, sesame, orange juice and cinnamon powder that is fried and then covered with honey or sugar.

Wind doughnuts are a sweet recipe. A dough of flour and yeast to which sugar will be added.  Finally, depending on the case, you can sprinkle cinnamon to give it flavor. Their origin is Jewish and it is common to find them in Andalusian pastry shops from All Saints’ Day until Easter.

Their name comes from the fact that the dough, when fried, doubles. In this way, it seems to be full of air.

It is a vegetable soup made from cod, chickpeas, spinach and hard-boiled egg. The vigil stew is eaten alone or accompanied by a salad.

Above all, avoid meat, as we are in vigil time. Where cod and sweets are the specialty.

Getting to Torremolinos is really easy, like most cities in Andalusia. Because it is very well connected whether by train, bus, car or plane. It is also a very touristic city, especially during the summer, one of the most visited towns on the Costa del Sol. Thanks to its proximity to Malaga (the distance between Torremolinos and Malaga is only 14 kms), you can get to Malaga International Airport and from there move to Torremolinos.

How to get to Torremolinos by car

Torremolinos can also be reached by car using the MA-20 motorway from Malaga, in addition to the AP-7 from the south (Marbella for example). It is quite easy to get your bearings and drive in the south of Spain. The signs are quite clear, as always remember to respect speed limits, traffic lights and other traffic rules.

What to see and do in Torremolinos 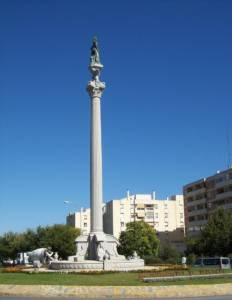 Pass through its famous streets:

But of course, Torremolinos’ main tourist attraction is its beaches. Because Torremolinos has 7 kilometres of coastline. These are urban beaches accessible from the Paseo Marítimo. In addition they are generally dark sand and moderate waves and present a high level of occupancy during the summer months. The most popular are the beaches of El Bajondillo and La Carihuela, which are in the city centre.

The first one is more than one kilometre long by 40 metres wide. La Carihuela is approximately the same width and about 2 kilometers long.